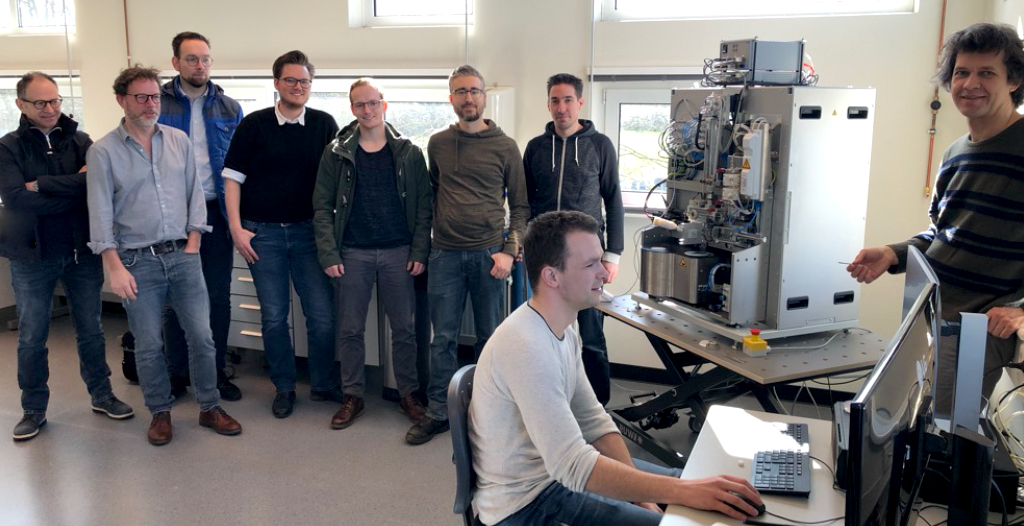 From idea to global sales

Our VitroJet technology has been invented by the team responsible for the development of the Vitrobot* (licensed to FEI), based on research performed at Maastricht University in the Netherlands. This became the standard in cryo-EM sample preparation equipment worldwide. So, it is fair to say the CryoSol team has been in the development of cryo-EM sample preparation technology for over two decades. It was founded on research executed at Maastricht University, dating back to the early 90’s of the previous century. The close collaboration which started between between Dr. Peter Frederik of the cryo-EM laboratory and Maastricht Instruments, has been continued with Professor Peter Peters and inventor Frank Nijpels, both active members of the CryoSol team.

Having successfully introduced the world-standard in vitrification technology, our team is familiar with the limitations of the existing sample preparation solutions. With the improved performance of the microscopes and data processing, the preparation of samples has become a known bottleneck in the workflow of single particle analysis. Current sample preparation solutions do not provide sufficient control and feedback to allow scientists to quickly optimize their grid preparation processes. This can result in a poor success rate of vitrified grids, causing low efficiency of microscope use.

To the new standard

With this knowledge in mind, we have focused our development on control rather than just speed. We have chosen to work with pre-clipped autogrids, which allow for maximum automation. Handling autogrids has become possible due to the use of a different vitrification principle, ethane jetting vitrification instead of plunge freezing. With ethane jetting, cryogens are brought directly to the sample on the grid. Whereas in plunging, the entire grid is brought to the cryogen. Jetting allows for cooling down grids from the center outwards, making it possible to handle the higher thermal masses of autogrids.

Furthermore, the sample deposition process we apply is different from all other techniques. Instead of applying an abundance of fluids which need to be thinned to the desired layer thickness by blotting or wicking, pin printing is used. A pin is dragging a tiny droplet across the grid surface, immediately yielding a desired layer thickness. This process is by far the best controlled method to guarantee certain layer thicknesses, as there is no dependence on uncontrollable blotting/wicking. These insights have resulted in the creation of the VitroJet; the next standard for sample preparation for cryo-EM.